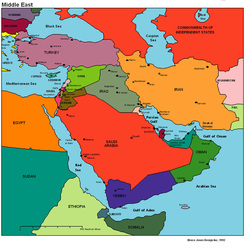 Middle East
One of the most wonderful features of modern technology is that it has become much easier for entrepreneurs from all corners of the globe to come together and do business. Many venture capital companies such as Effi Enterprises are looking to invest in startups around the globe that show great potential for growth. Venture capital investment firms invest sizeable amounts of money into companies that have solid plans for growth in place and are in need of cash to accomplish them. These investments help the companies that receive them immensely and also have ripple effects in the local economies, often strengthening them as more jobs and disposable income come into the region. Venture capital firms are recognizing more and more that there are huge opportunities throughout the world for investments and are becoming increasingly interested in funding these projects.

History of Venture Capital in the Middle East

The Middle East has not traditionally been a bastion of startups and entrepreneurship despite the wealth of innovative thinking and business savvy already in the region. One of the largest obstacles to startups and entrepreneurship in general in the region has been government policies and cultural issues. The Middle East has a strong base for managing basic services but startups have long complained that they need a larger, more global audience in order to be successful. There are a few ‘free zones’ in the middle east that do not require a local majority stakeholder partner that have allowed a few startups to flourish, but these are rare and relatively unknown. The region has been known for having many fees for licensing and other aspects of business ownership in the past that have proved challenging to startups. High costs for rent, labor costs, and high costs of living have also proved difficult for businesses in the region. The general opinion is that these challenges frustrated and discouraged entrepreneurs as well as stifled innovative thinking in the region in general.

In addition to these challenges that are somewhat universal, there have long been some cultural issues that have lead to a rather unique set of regional challenges. These challenges are largely based around the perception of failure in the region. In many Middle Eastern nations filing for bankruptcy is considered a criminal offence. Simple things like a bounced check could have serious consequences like jail time. These unique challenges make business very difficult in the region. Due to the fact that it has been so difficult to start a business in the region there has been little in the way of a venture capital market in the Middle East.

The governments and policy makers in the Middle East have recently begun to realize entrepreneurship is a huge factor in an economy’s growth potential. As economies grow, political situations tend to stabilize as well. This means that entrepreneurship has a far-reaching effect in a region. Middle East governments have begun encouraging entrepreneurship and venture capital firms have begun to arrive in the region accordingly. One early venture capital success in Dubai is called the Seed Startup. This group began offering a ‘startup accelerator program’ where they would invest between $20,000 to $25,000 in exchange for 10% equity in the company. They would then stay on and mentor the companies for 3 months, sharing ideas and feedback with the entrepreneurs.

The idea of entrepreneurship in the Middle East is getting an unlikely boost from a television program called ‘The Entrepreneur.’ This show invites 100 contestants on to compete until only 1 is left who is declared the winner and given the money to fund their startup. This sort of pop culture interest in entrepreneurship combined with encouragement from the government is increasing the need for venture capital in the region.


The Future of Venture Capital in The Middle East

Venture capital is ever increasing in the Middle East as the demand for capital for startups continues to grow. Currently there are more than 400 venture capital firms that are actively investing in new businesses in the region. It is expected that venture capitalists will play an increasingly large role in the development of the region in the near future as the idea of entrepreneurship becomes more and more popular throughout the region. This increased demand will only continue to build as governments continue to put new, business friendly policies into place.